Working of a simple mechanical watch

Sketch of a mechanical watch : 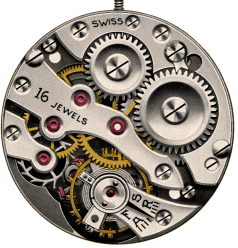 The two sides of a mechanical watch :

This is the side you could see if on the back of your watch there was a glass.

On this side is the mechanism that works the watch.


Terminology of the geartrain

When you wind up your watch with the crown, you tighten its spring.

is equipped with a

winding pinion.
and a sliding pinion (or wig-wag pinion).

The hole of the wig-wag pinion is square and lays freely on the square part of the stem.

When you wind up your watch, the wig-wag pinion is held against the winding pinion thanks to the yoke.

Thanks to the crown wheel, the winding pinion drives the ratchet that is fixed on the square part of the barrel arbor.

The click prevents the ratchet from coming back and thus from unwinding again the spring barrel.

moves freely in the barrel drum

When you wind up your watch, you tighten to its maximum the spring around the barrel arbour.

Then, when your piece works, the spring wants to get back to its initial position. In consequence, it pulls the barrel drum that in turn transmits the driving force to the geartrain.

Thanks to this force, the balance swings and your watch works. 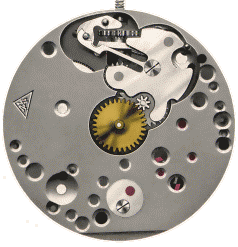 This is the side of your watch that is under the dial and the hands.

See above for the reassembling